Home > Pneuma Solutions Blog > The Line Between Ignorance and Stupidity: My Experience with the Pit Boss 1150 PRO 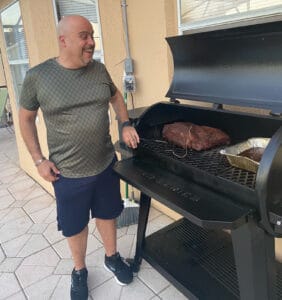 This past March I purchased a Pit Boss Pro Series II 1150 grill at Lowes. Like others tired of being cooped up for a year of Covid restrictions, I was getting ready for the summer heat and many days spent in the pool, grilling in the Florida sun, in the company of friends and family.

I chose this brand and model because it was said to be a solidly built product, had great reviews, and best of all a great value for the price.  The smart technology features were important to me because most pellet grills have inaccessible digital LED control panels. I have previously owned a Green Mountain Grills smart pellet grill that did the trick at the time, but for the combination of reasons above I moved to the Pit Boss. I figured the companion app to the 1150 would be perfect to be able to grill independently using my iPhone and the included VoiceOver screen reader.

When I finally got the grill delivered and began to set it up on my network, I discovered the app was not accessible for blind people using the iPhone. You see, I had no way to know if the app was accessible until I connected it to a grill, something that can’t always be done in a store, especially with a grill. It was impossible for me to independently connect to the grill for the first time with the app. Even simple things like setting and adjusting the grill temp were impossible for me to do by myself. This basically left me with a useless product, but I had hope!

I called Pit Boss. Surely there was something that could be done as a work around until the developers could make it fully accessible. As a blind consumer having dealt with hundreds of consumer electronics companies, over the years, this would not be my first time giving the Accessibility 101 class. While sometimes frustrating when something doesn’t work, I am usually pleasantly surprised at the level of enthusiasm most companies display when they find that there is an entire market of customers out here they never noticed. I have written many reviews throughout the years describing my mostly positive experiences. Because many of us blind folks self advocate for accessibility, many consumer products have become usable to various types of enthusiasts. So, armed with these positive experiences, I figured, “I got this!”

After making my way through a complex menu structure on the Pit Boss phone system, I finally connected with Smoke iT app support. I must mention here that Pit Boss farms out the support for the app to the developer t2Fi. While many of the Pit Boss employees I spoke to on this journey weren’t able to figure out how to fix my problem, I never experienced the level of ignorance from Pit Boss support staff like I am about to share from the t2Fi support and management teams. 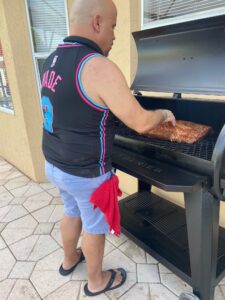 The t2Fi representative seemed to have been caught off guard. He didn’t know blind people could cook, let alone use grills. It’s at this point that we start exploring the line between ignorance and stupidity. You see, an ignorant person cannot be fully blamed for not being aware of something. For example, your average t2Fi customer representative may have never considered how a blind person would grill meat. Once explained, they can no longer claim to be ignorant. Right? Yeah, no!

If it had only ended there, but we were just getting started. The rep began to wax philosophical about how “I needed to understand that blind people are the minority,  so we probably weren’t very high on the priority list when designing this grill. After all, more sighted people buy grills than blind people.” He actually said this! He continue to add insult to injury by informing me that the future feature list was long but he would make sure that my feature request would get on it. But, he was unable to tell me when or if VoiceOver support was coming to the Smoke iT app.

I was done with this guy. I demanded to speak to someone in charge. My call was escalated. I was told I was going to speak to the actual owner of t2Fi, Ken. I was excited. Certainly Ken, the owner, knew about accessibility. After all the website was full of consumer level automation software. This couldn’t all be inaccessible could it?

But, alas the ignorance, or is it stupidity, continued. Ken got on the phone and explained that Pit Boss had never asked them to include the feature of VoiceOver or Talkback support in the Smoke iT software to control the grills. I explained that Pit Boss most likely wouldn’t be aware of accessibility features in the operating system or software and web accessibility standards because they build grills and he, Ken, builds software that has to adhere to these standards. So, it is his responsibility to include these standards in the original design, if possible. I explained to him that there was a possible ADA violation by not making the Smoke iT software accessible to consumers with various disabilities. I further explain to Ken that t2Fi was responsible to Pit Boss to inform them if a product didn’t meet accessibility standards that incorporated features included by Apple and Google as part of the software development tools meant to accommodate customers with disabilities. If t2Fi didn’t do this, they were opening themselves and Pit Boss up to a possibly huge legal, consumer, and PR backlash. He promised to speak to Pit Boss management about my concerns to see if they would fund my “feature request.” He would get back to me. Three months later, I’m still waiting.

I called Ken back several times and never got a phone call again from any t2Fi employee about this issue. 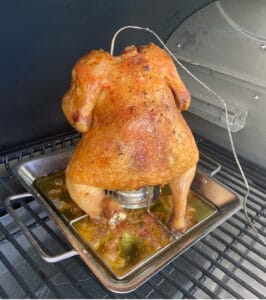 Second, the company lunged headfirst into the land of the stupid by pointing out there were more sighted customers than blind. The issue was not high on their priority list. Putting ADA violations aside, the company’s management  had been made aware of their oversight and chose not to make it a mutual concern.

I’ve spent decades in the technology industry, mainstream and assistive. I’ve learned consumers too often pass up the opportunity to communicate their complaints with product manufacturers, likely because they did not know how to explain the problem of inaccessible interfaces, but we have made enough strides in technology that it should not be your responsibility to explain to a developer the importance of inclusivity. If you ask an architect to build your house, it’s up to them to figure out the permits.

I reached out to Pit Boss and t2Fi in March. We’re now approaching mid June, and there has been zero progress on making the Pit Boss usable for a blind customer.

Lowes was great. They gave me my money back even though the product return period had expired. They did not ask questions about how blind people are able to cook. To them, it was enough to want to do right by me as one of their customers.

In order to enjoy the independent grilling experience I want, I would have to end up spending $1,500. This is more than twice the price of the original grill I purchased. Also the product I ended up with is 2/3 the size of the Pro Series II 1150. In today’s climate of diversity and awareness, this blind tax is a reprehensible travesty. 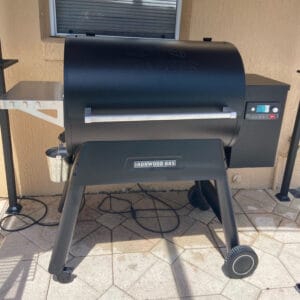 In the end, I purchased a Traeger Ironwood 885 for my needs. Now the Traeger is an incredible grill and worth every penny. But I, like many consumers, liked the Pit Boss promise for great quality for a great price. I am not going to give a review on the Traeger here but when I was shopping it was certainly my second choice based on the price not the quality. Lowes provided an excellent purchasing and ultimately return experience. Even though I was purchasing the next grill from a competitor, Lowes let me hold on to the Pit Boss over the memorial day weekend while my replacement was on the way. They took my situation and made it their problem. I am forever grateful to my Orlando Lowes team for treating me with respect, compassion and dignity. How is it that a company with experience across a wide range of home management projects like Lowes did not bat an eye, but a company with a much narrower scope could not wrap its head around a blind person using one of their products to prepare a meal? The manager at Lowes said he would report this entire story to the main corporate headquarters. I have high hopes that Lowes will do the right thing and demand Pit Boss adhere to accessibility standards for the Pit Boss products Lowes sells to its customers with disabilities.

Unfortunately Lowes did not have another smart grill that fits my needs so I moved on to Home Depot. They were amazing as well and had me grilling in an accessible way on a Traeger Ironwood 885 in just a few days. But more about that in a minute.

The line between ignorance and stupidity is not a fine one. We can excuse people for not being aware of all things, but stupidity says the person, or in this case a company, was properly and patiently educated and made the conscious choice not to care. Between the time Lowes agreed to take back the grill and the time they picked it up, I contacted Pit Boss one more time to inform them I was quite disgusted with my user experience and that I would be reflecting my feelings in a review. In fact, I did post a 1 star review and somehow it never got approved on to the Pit Boss site. I ultimately got a call from Pit Boss quality assurance. I was promised that my issue would be looked in to. I informed them that I had to return the grill because I had heard nothing for 3 months and Lowes was nice but not that nice. I was given the contact info for the person in quality assurance to contact if I had any other issues with Pit Boss. I waited and after a couple of messages back and forth between Pit Boss quality assurance and me, I was told that VoiceOver support would be out by July. I told them I would be happy to test if they provided me a grill for testing, but, I wasn’t going to gamble any more with my money on Pit Boss until I saw a concerted effort to serve the needs of Pit Boss customers with disabilities. If I had heard from this quality assurance person the first or second time I contacted Pit Boss back in March, they might still have a customer. But instead, they have a black mark that will not be forgotten by our community until it is resolved. Despite paying more, Traeger inspired my loyalty because they have listened to the feedback of the blind BBQ community. Is the Traeger perfectly accessible?

For the most part, yes. It can certainly use some accessibility love in certain parts of the app, but I am sure that when I call Traeger with a problem with accessibility of its app, I am going to hear a considerate voice that is going to treat me with the respect a paying customer requires, and the problem will be addressed

As much as it pains my bank account to pay twice the price, you can’t really put a price on respect, empathy and inclusion. So, I got what I paid for!

This site uses Akismet to reduce spam. Learn how your comment data is processed.